AQUATIC ECOLOGY, ROAD SALT, & CITIZEN SCIENCE
Does brining decrease the chloride in urban stormwater?
Chloride pollution presents a difficult challenge to stormwater managers.  Many urban pollutants like sediment, bacteria, and nutrients can be managed by increasing stormwater infiltration; infiltration takes advantage of the natural filters and biological mechanisms of soil and plants to help cut the amount of pollution that goes into streams and other surface waters.  Unfortunately, infiltration does not remove chloride.  Most of the chloride stays dissolved and is carried into groundwater, causing further contamination (Kelly 2008).  Unlike many other pollutants, there is no effective method for removing dissolved salts from stormwater, so the only way to decrease winter chloride pollution in urban stormwater is to decrease the amount of salt we put on roads during winter storms.

Several best management practices (BMPs) can be used to decrease salt application during winter storms (Findlay and Kelly 2011).  Some cities in the St. Louis area use a brine pre-treatment (anti-icing) BMP.  Brining uses the same salt, but it is dissolved and spread on roads before the forecast storm.  Past studies of brine have focused on highways and parking lots.  My objective was to assess the viability of brine application as a BMP for chloride on residential roads. 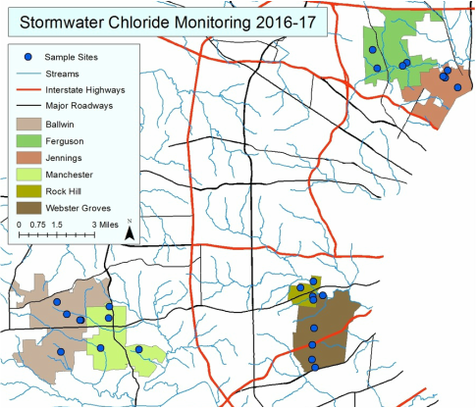 Stormwater chloride measurement locations in St. Louis County.
In partnership with the Metropolitan St. Louis Sewer District (MSD) and six city governments, we measured chloride in stormwater that flows into streams with known chloride impairments.   Three cities in St. Louis County had already invested in brine systems (Jennings, Webster Groves, and Ballwin).  We compared chloride yields in runoff during nine storms in these three communities to yields in neighboring communities that rely entirely on solid road salt (Ferguson, Rock Hill, and Manchester).  We found an average chloride yield decrease of 45% in stormwater from brining municipalities. (See our published results on the Publications & Outreach page).